We had a great time! Tropical Storm Fay didn't do anything-- just some rain, a few gusts of wind, no damage.

No one wants to admit there will be more Harborside being built until Phase 2 is sold out. From the pages we saw at the Owner's Update, they have Silver season available for 2BR LO. No 3BR LO for any season. 1BR Premium in Gold season left and very little inventory in Platinum of anything. We told them we wanted a 2BR LO Platinum and they rolled their eyes. Then they went back to inventory and found us 2 halves that they were willing to sell us at the list price for each half ($60,180 total instead of $52,000 for a 2BR LO).

We politely said no. They were willing to sell us the 1BR Premium for $36990 and ask to get our SBR requalled, since that price is close to the $40K needed to requal there. We still said no.

The interesting thing is that they offered 315,000 StarPoints for purchasing the 2BR LO in 2 pieces. 180K for the large side, 75K for the small side, and 60K (30 per side) because we were owners already. Sounds like they have points to give away to incent purchase.

They were also really pushing financing.

The salesguys said that they will probably start selling other properties once Phase 2 is sold out. But they haven't started that yet.

We saw lots of people taking the tour, since the showroom was across the street/path from our room. Pretty much every half hour or so, every day, all day. Their large sales area in the Beach tower was full every time we went over there.

We are fairly certain Phase 3 (which SNAVicki heard called Harborside II) will be across the channel from Harborside, where the cement(?) factory and part of an airport was. We saw dirt being pushed around for most of the week. Everyone laughed (as in an, I know but I can't tell you, laugh) when we asked if/where Phase 3 would go. But some of the sales people were more willing to talk and confirmed that it was going to be in that area. We asked everyone -- bus drivers, sales people on the bus taking people on tours, the towel staff. SNAVicki -- I can't remember exactly what you heard (too many pina coladas at the pool). Please chime in.

The current story is that the area next to ScotiaBank, where the shopping center was, will be more Marketplace shops. But that area is now planted with trees and grass, so nothing will be happening soon.

There were a few things (we were in Phase 2, building 2) that were "cheap". Made me think they were cutting small corners. We did not have cloth napkins nor placemats, but we did have napkin rings! The inventory list on MSC indicated we'd have cloth napkins. I'm not a normal user of cloth napkins (altho my kids are moving us in that direction environmentally) but I didn't bring paper towels or paper napkins, thinking we'd have cloth napkins. Plus, since you're doing laundry every day anyway they're easy to throw in. Next, we didn't have a frying pan in our unit. We had to call to ask for one. Third, the kleenex box covers didn't have a box of kleenex in them, just a pile of kleenex. Like they took a big box and put a pile under the cover. I found this out when the DS wanted a bunch of kleenex so I took the cover off and there wasn't a box underneath! Fourth, no starter pack of laundry detergent. We had brought our own so it didn't really matter. Finally, the dish towels were 2 HandiWipes. No real towels. I found a housekeeper to ask if there were supposed to be dishtowels and she said "only the blue ones." So I did hand washing with one and drying with the other. They were replaced midweek. We had compact flourescent bulbs in a few lights (not all), which was a good thing that they should do. Again, basically small things, but not what I expected.

And on the VERY last day, we ran into Mr. SNAVicki while I was taking pictures with the TUG banner. Our PM never got thru to her so we kept missing each other. And although I had put the banner on our balcony for the first couple of days, they never walked that way. So we finally met on Thursday. It's always great to meet people you "talk" to here! Our DS's had fun in the pool and shuffleboard.

Oh, and the picture

clsmit and SNAVicki in our finest beach attire! (she'll probably never speak to me after this!!!) Mr. SNAVicki makes great pina coladas, which we can set on the side of the pool but not drink in the pool. 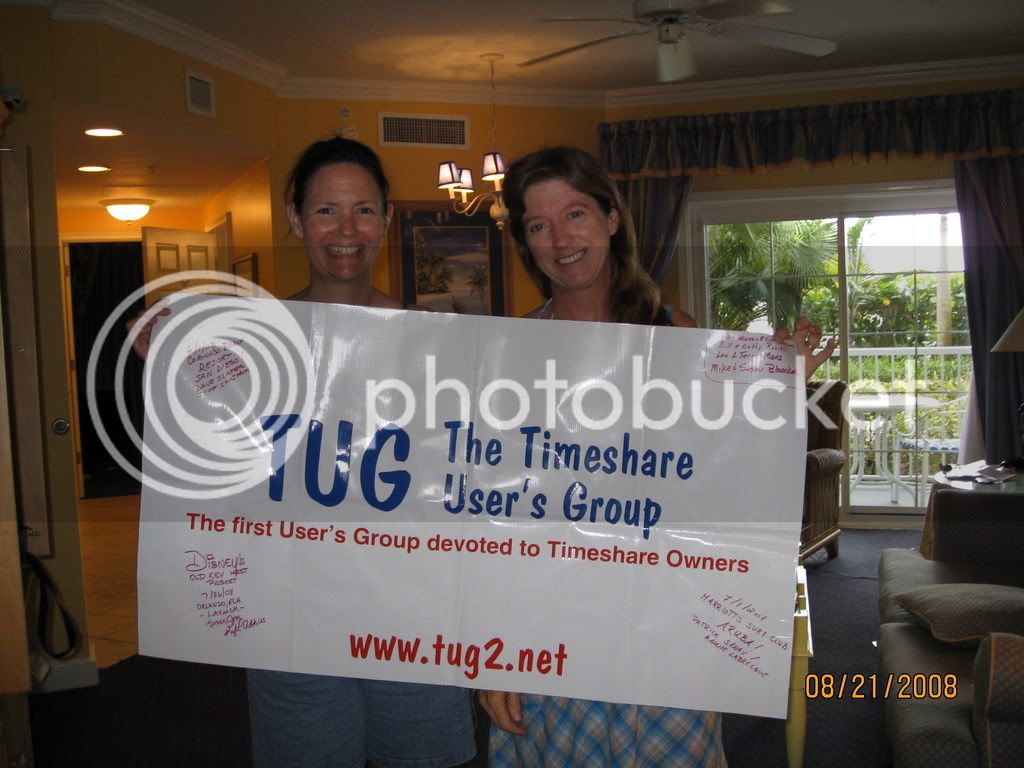 Thanks for the update.

When we were there in June, there were 3 bedroom units left in gold season. But was told that they had expected to sellout before the end of the season. I took it as a sales tatic, but maybe they were telling the truth for once.

We were told that the phase 3 was going to be a tower and alot more expensive. But again, we just dismissed this as rumor.
B

The first week of August when I was there, I was orginally going to get a 3bdrm gold EOY. Went in the next day and changed it to an annual 2bdrm gold LO. Got the same eye rolls and "have to check inventory", but maybe they really are selling out if those units weren't available a week or two later. I noticed the same thing - the sales office was buzzing with people doing each time I went in, and the Beach Tower and Royal Tower sites were very busy with people, too. Interesting.
Christy J
S

Thanks for the update! I am glad for Starwood that business is good. They should really start selling though because it will take a while "on island time" to build that next building. They will be in limboland like they are with Hawaii right now. 2 large areas sold out and nothing to sell there until the 3rd goes up. Missed opportunity...