Has anyone walked The Camino?

My neighbor is off to Spain this morning to walk the Camino with two friends, an adventure delayed two years because of pandemic. She has been practicing with her pack back. We are all excited to follow
her adventure 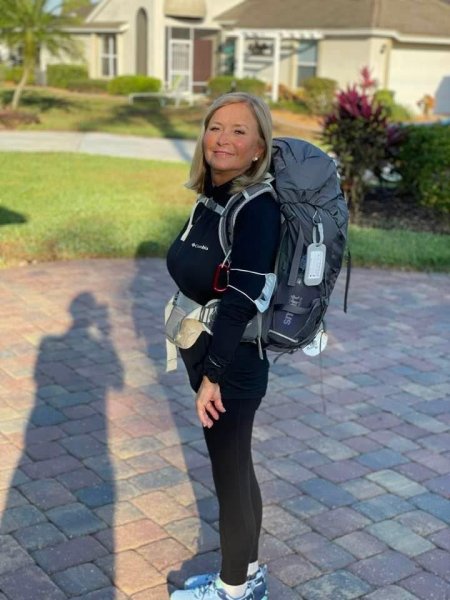 I haven't done it, but know a few people who have. It sounds like a very life altering experience. One woman I know ended up pregnant, haha! She married the man she met on the walk a few months later.

presley said:
I haven't done it, but know a few people who have. It sounds like a very life altering experience. One woman I know ended up pregnant, haha! She married the man she met on the walk a few months later.
Click to expand...

Lol, one worry she doesn’t have at 75

When I retired in 2018, a co-worker walked the entire Camino. He asked for walking partners for sections. I (and my brother) walked with him for the section from Saint-Jean-Pied-de-Port France, to Logrono Spain. About 100 miles, including the section over the Pyrenees (rather strenuous for these old bones). It was a wonderful, life changing experience.

I loved the camaraderie of the pilgrims (the nomenclature for those walking the Camino - your neighbor is now a pilgrim). My observation about the demographics - it was mostly dominated by 20-somethings and 60- and 70-somethings. Not much in between for those in mid-career. But I felt like the two ends of the demographic spectrum really added something to each other's experience. I met a 20-something from Brooklyn who walked the entire Camino with his guitar. Had a blast in one of the white towns when nearly everyone on the main square (used mainly for seating for 6-8 restaurants) joined in a hootenany. Particularly a group of rather drunk Irishmen, who were a real hoot.

Also met a 75 year old British gal, who didn't have the oomph to do the entire Camino. So every year, she walked a different section. I think it was her 8th year or so. She was fascinating. BTW, we met at a nunnery, a section of which was turned into an albergue (Spanish for hostel, particularly oriented to Camino Pilgrims).

I'm sure your neighbor will have many fascinating stories when she returns. Kudos to her.

Note the small sign attached to the wall above brother John. Blue square with yellow sunburst/clamshell pattern. This is the official sign of the Camino. See it, and you know you're on the right path. It was embedded all over the Camino - sidewalks, roads, buildings, etc. 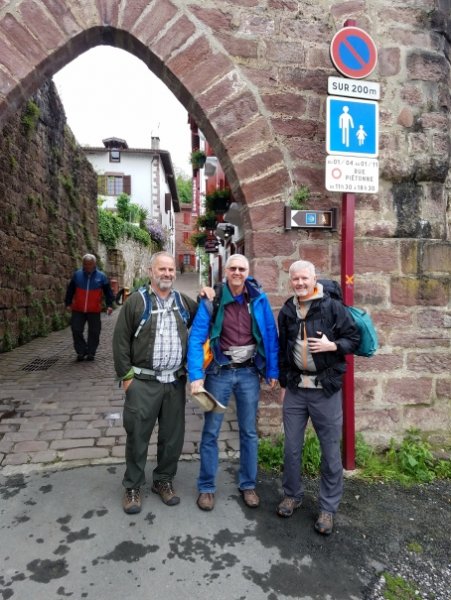 Me placing ashes of my neighbor, who died before he could go on the Camino with his DW, a lifelong dream for both of them - 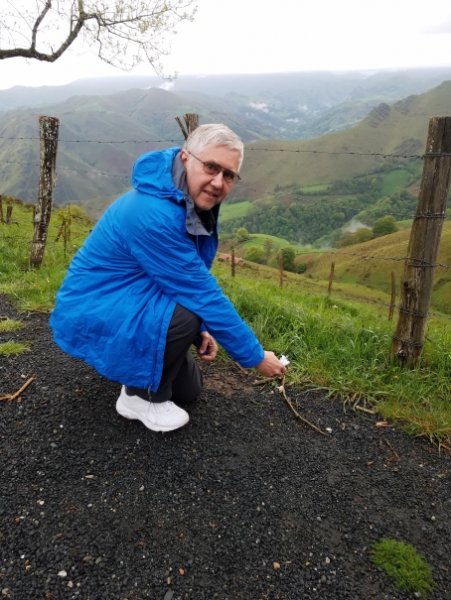 Mountain pass through the Pyrenees - me and brother John. Think those clouds on the pass look ominous? Yep, we had nearly blizzard conditions within 20 minutes. Took shelter in a mountain hut until it passed. This was on May 1! 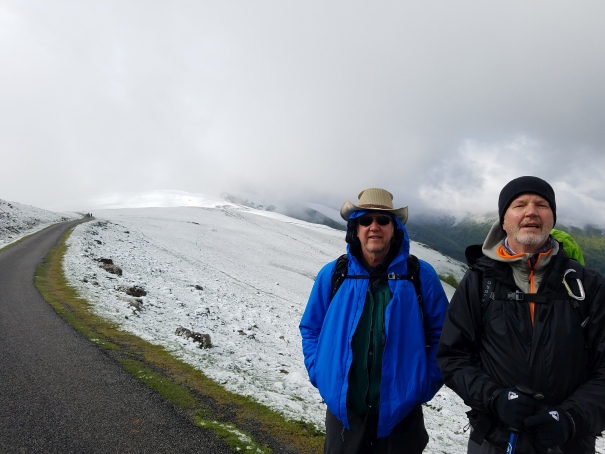 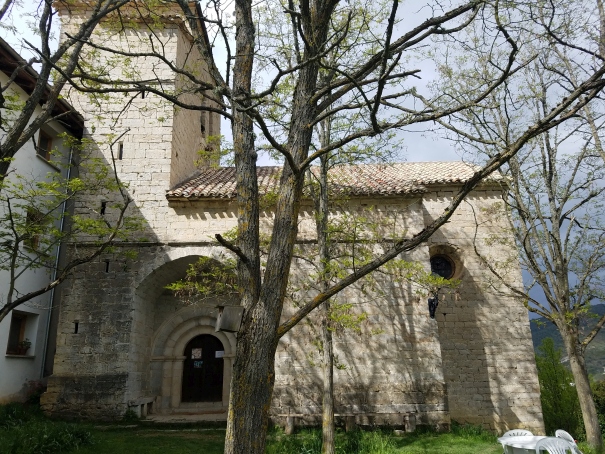 I loved your story and pictures
J

Me too. Thanks for sharing. Would love to do the pilgrimage one day....but i would also have to be one who does a portion at a time!!!

She has been posting pictures, she posted one looking cold, near a sign saying 260 kilometers to go. Doing 172 miles
Last edited: Apr 2, 2022

rapmarks said:
She has been posting pictures, she posted one looking cold, near a sign saying 260 kilometers to go
Click to expand...

Do you know where she started? I assume she's heading for Santiago de Compostela, the traditional end point. Inferring that she's taking the French route, and that she's been gone a couple of days, I'd guess she started around Leon. Close?
Bob

I think Astorga Spain. There was mention of Leon

No, but love the movie “The Way” with Martin Sheene

My brother and his family did it a few years ago.

My brother and his wife like it. I think the kids (who were older teens) put up with it. They stayed in hostels along the way. The only real negative I got out of them is that they were asked if they were jewish a few times - after replying yes the first time - some people in the hostel avoided them. It made them uncomfortable. They didn't want to answer the question again.

Personally - I dont want to stay in a hostel. My wife's idea of roughing it is staying at Motel 6. I can't say I disagree with her much. I am not religious whatsoever, but I am proud of who I am. I would not take the questioning well.

My friend is staying in hotels rather than hostel. I would not enjoy the questioning Either

We alternated between albergue's (hostels) and hotels. I agree that the albergues were a pain - crowded, noisy (snoring etc), sometimes smelly, shared bathrooms, etc. Yet, they were the only way to experience the true camaraderie of the Camino. I felt like when we were in hotels, we missed most of the common experience, shared meals, etc. Lost track of some of the friends we met along the way when we weren't in albergues.

It was a real conundrum -- making lots of friends and having shared experiences, versus being able to sleep ;-) We solved it by alternating.
Bob

Walked 7 miles around the town yesterday, ten miles today to see another town. It must be addictive
S

This is on my bucket list. I like the idea of alternating between the albergues and hotels. I need my sleep.

My friend is now making plans to walk the Camino in Portugal next year!
J

My wife and I started and had to quit in 2012. We stared in St Jean and finished two days out of Pamplona. In 2018 we started at the same spot and finished it. It was a great experience and we have hopefully more caminos in our future. She also gave me the book pilgrimages in England for Christmas a year ago - so hopefully that also. I might add that we are complete couch potatos the rest of the time.