Can someone confirm that the 2bdrm deluxe floorplan on Starwood's website is indeed the 2bdrm OF deluxe corner unit?

If it's the "deluxe" 2 bdrm plan on StarwoodVacationOwnership.com, then yes, that's the one. They're gorgeous and roomy, and the studio side has a lanai, too. The only downside is the extra MFs.

So, is the term "Ocean Front" only no longer used?

Boy. Someone is gonna be really mad when they buy an OFD only to find out it really isn't what they thought it was.

SDKath said:
Boy. Someone is gonna be really mad when they buy an OFD only to find out it really isn't what they thought it was.

You bet! I better get it right.
G

On the Mystarcentral site it just lists: 2-bedroom lockoff villa.

No mention of premium or deluxe anywhere but it is an ocean front center unit.

Yep - the reservations no longer list the floor plan for either side - the floor plans have been switched somewhere along the line. I told the salesperson and the shift manager that this info is listed incorrectly on their website.

I called the SVO Elite line - before we went to WKORV - they just said that we would get our deeded unit. The biggest problem is clarify to a renter what type of unit they are getting because the SVO website has it wrong.

You buy what is deeded by unit number for OF corner or center (the center being the larger 'premium' unit that used to be called 'deluxe' (even on my old reservation confirmations). This is a typical screw-up by Starwood - where one hand doesn't know what the other is doing - OR - they have done it for a reason that we will eventually find out about.

The premium unit at WKV is the larger size - so it would be consistant.

Anyone know what a OF Deluxe (corner) unit/week should appear on the deed? How can you tell by looking at the deed?

The studio is on the corner and the studio lanai faces the side of the Bldg. Since it's right on the corner, it has a gorgeous ocean view!
We have a new COVID-19 forum - it's right under the TUG Lounge.

This was our sunset view from the OF corner studio on the WKORVN side: 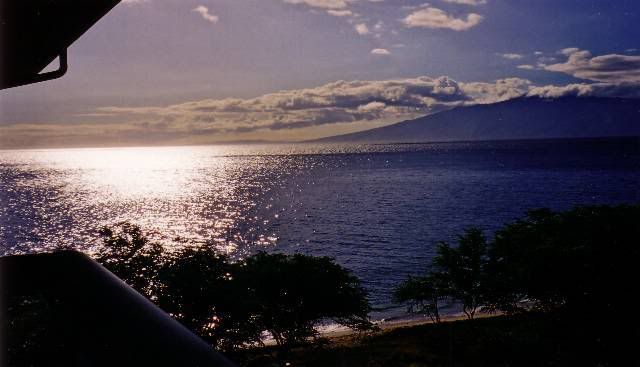 I don't doubt what everyone has been told, but changing what is called "Deluxe" at KOR is not that simple. "Deluxe" is not a marketing term, or common reference for reservations.

I guess it could be changed, but it would require amended and restated Governing Documents to do so. I am not aware of such amended documents.
Has anyone received them? Or notification that amendments have been made?

It s goofy to retain a descriptive term, but change its meaning.

Fredm said:
It s goofy to retain a descriptive term, but change its meaning.
Click to expand...

Ah, Starwood, how we love you!

True, but unlike the ocean view studios, it has a full lanai and is a bit roomier than the regular oceanfront studio (the "new" deluxe or the "old" premium). On the down side, you don't have the direct ocean front view and the maintenence fees are more expensive.

'Deluxe' or 'Premium' is not on the deed. The deed will have the unit number(s), the week, the usage, and type (float/fixed). I haven't look at my deed for a while, but I do not think OF/OV/IV is listed, but it could be - if I can find it easily - I will check.

The WKORV OM will tell you what type of unit it is - these were listed on TUG (by me I think) quite a while back. As FredM states - the OM does indeed state 'Deluxe' as the corner units. It does not use the term 'Premium' to describe the others. I had forgot about this - this will add fuel to the fire.

More importantly - who at SVO (of the many VPs) do you think would be a good person to contact regarding getting clarity on this issue (Deluxe vs. Premium)?
Suzanne Clark?
- David

I just wrote Suzanne Clark an email regarding the issue of the supposed switch in villa designation - her response should be interesting - I will post when/if I get one.

DavidnRobin said:
I just wrote Suzanne Clark an email regarding the issue of the supposed switch in villa designation - her response should be interesting - I will post when/if I get one.

I got a phone response from Starwood Corporate on this issue. It turns out that the reservation system at WKORV (Galaxy) has the corner units designated as "Premium" so the folks that work at WKORV go by that since this is what they see in their computer system. This is unique to the reservation system at WKORV and SVO Corp is aware that this is different than the designation given officially in the WKORV Owner's manual and on the SVO WKORV website - which refers to this units as "Deluxe".

It appears as if someone was not paying attention when they set-up the reservation system at WKORV (I think it was changed over recently if I understood correctly).

SVO informed me that they have spoken to the General Manager at WKORV about this. The solution (if I understood correctly) was to ensure that people checking in will be informed that their units are the "Deluxe" units eventhough they are listed as "Premium" in the reservation system.

The reservation confirmations from SVO will not change - meaning no designation (other than view-type) will be listed on the confirmation.

In going back and reading this - I have to chuckle. While not a big deal since we will get the unit type that we purchased (as long as reserved in the Owners window at 8-12 months) - it is indicative of the lack of comprehensive QC (Quality Control) when it comes to SVO's reservation and database systems - something we all are well aware of.

It was nice that they responded by phone - and the person was very understanding as to the issue, and my concerns - but they are not going to alter a system that is already in place.
- David
O

Random question about these units. If you decide to lock-off and use as 2 weeks, are you guaranteed the larger/with balcony studio when you occupy your studio week?

So, as a practical matter, the name has changed.

The staff and reservation system refer to "deluxe" differently than what owners purchased, and the Governing Documents specify.
However, the term remains in use, and means something else.

And, because this occurred as a result of a screw up, rather than it being intentional, it's ok?

I don't think so.

It may be a bit inconvenient for Starwood to get it right after screwing it up, but it does not require a systems overhaul.

Meanwhile, almost 2000 owners are potentially affected.
WE may know that "Deluxe" referred to the corner units, and now refer to the center units (even though the GD's say otherwise), but what of those who do not? Owners and renters alike.

Who is to explain to a renter that inquires to verify the location of the Deluxe unit they are renting, when given conflicting information?

There is no valid business reason to not fix this. I am not splitting hairs. If the term "Deluxe" were removed entirely when the system was switched, I would not be as concerned.

ocdb8r said:
Random question about these units. If you decide to lock-off and use as 2 weeks, are you guaranteed the larger/with balcony studio when you occupy your studio week?
Click to expand...

They are informing the front desk people that "Premium" units in their reservation system are "Deluxe" floor plans as deeded and as floor layout (corner unit) shown on the website. The Premium units are not named anything other than a standard unit. You only get this info at check-in - as you cannot call ahead to WKORV about the unit - you must call SVO.

So... I personally am not concerned about this.

What I am concerned about is the lack of unit layout type (Deluxe, or Premium/Standard) on the Reservation Confirmation. OF, OV, IV, and type (2Bd LO, 1Bd, studio) are shown on the reservation. This is an issue for renting a unit out, but I guess I will plan to cover this.

So... at WKORV (Deluxe = premium, and Premium = standard) and at SVO the Deluxe and Premium units are as deeded and listed on the website.

Now that they are aware of this issue (they were not until I contacted them) - I get the impression that their plan is to communicate to the WKORV staff the difference between the types in the resevation system, and nothing beyond that.

Send me a PM and I will be glad to send the phone number of the person I spoke with at SVO. I found out what I wanted and will not battle this with them. I think is is stupid, but minor in the scheme of things (like HOA control and accountability) and it doesn't surprise me that they screwed this up.

I will compensate by changing my rental contract as to capture this detail as to make it clear to the renter (which will only be an issue if they start questioning the designation at check-in. Unlikely)
Last edited: Dec 17, 2008
- David

ocdb8r said:
Random question about these units. If you decide to lock-off and use as 2 weeks, are you guaranteed the larger/with balcony studio when you occupy your studio week?
Click to expand...

If you do this - reserve the 1Bd side first - if there is available occupancy for the 2nd week - like in a very low season - (and you are real nice) they may just give you a 1Bd side for the 2nd week.
shhhhhh....
- David
You must log in or register to reply here.
Share:
Facebook Twitter Reddit Pinterest Tumblr WhatsApp Email Link
Top