VOG bad in Oahu and I should know better

We are about to rap up our trip to Hawaii in a couple a more days so I will give a report when we get back. VOG has been as bad as it's been according to the news on Oahu so not good weather for picture taking.

We spent 7 days on Maui and are spending 5 on Oahu. My objective of going to the Islands on a yearly bases may be achieved as my wife fell in love with Maui and we already booked our place next year. We had not planned on going to the Islands in 2009 (we had a cruise planned instead) but our recent stay changed that and as I said, I will explain more why when we return.

Once again I packed a bunch of books thinking I would have a lot of time to read and by now I should know better! There is always so much to do!

PS: Any Tuggers at the Beach Walk?

I'm glad you had a good time. When I bought my timeshare in Maui I wasn't expecting to come back every year either. I looked forward to all the exchanges I was going to make.

Seven years later my family and I now always look forward to our next visit to Maui. We just end up having to travel more than we used to to see other parts of the world. Both of my kids would like to move there permanently.

Surprized to read the VOG on Oahu was bad since it is quite a ways from the Big Island. Didn't even notice it this time on Kauai but last spring it was sure terrible on Maui--burns your eyes.

I believe you can get a 5 year HI library card for non residents @ $35--a real bargain. Then you don't have to lug anything.
I

When the tradewinds stop blowing, the vog hits Maui and sometimes Oahu.

The breeze is back today, but it's a hot breeze. Pretty weird for here.

Kauai Kid said:
I believe you can get a 5 year HI library card for non residents @ $35--a real bargain. Then you don't have to lug anything.
Click to expand...

My DW did just that a couple years ago. Her only complaint is that the libraries on the BI & Maui are not as well stocked with books as those here. Too bad more funds can't be allocated to the libraries. They were cutting hours when we were there two yrs. ago.
Phil

For a few days last Feb the VOG was so bad on Maui that you could not see Lanai from the Marriott Maui Ocean Club. Friends who had never been to Maui joined us and I kept commenting to them that Lanai was very close and we usually were able to see it clearly. They didn't appreciate what I was saying until the VOG cleared and the view of Lanai was back to "normal".
Lisa

FWIW - when we were on the BI last summer, this is what the VOG looked like. This photo was taken at Jarret Observatory, looking west toward Mauna Loa. As we drove from Punalu'u toward Volcano we went through that.

It really was that bad. At times on the road visibility was less than 50 feet. 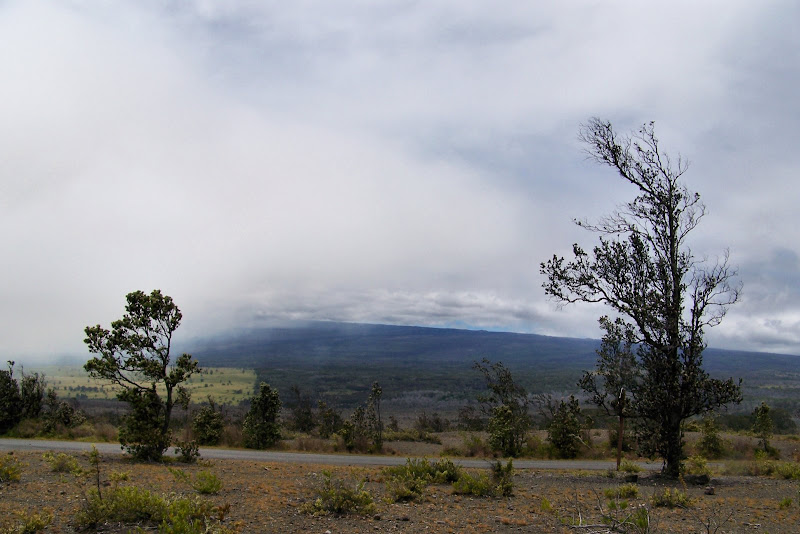 "The simple act of an ordinary brave man is not to participate in lies, not to support false actions! His rule: Let that come into the world, let it even reign supreme—only not through me." Aleksandr Solzhenitsyn
J

The vog yesterday was awful. Lived on Oahu my entire life and it was worst I've ever seen.

There was absolutely no breeze at all so the vog sat around all day.

Today, there is a gusty breeze and it blew the vog away... thankfully!

I never heard of the word vog before.
Is it worst on the BI? I would assume yes. How often is it voggy rather than sunny?
Cheers!
Ellen
Philadelphia, PA

Not sure what the effects are on humans

We have had several locals tell us the most scary part of the vog is there have been no long term studies so no one really knows the long term effects on the health of those exposed to it. And trying to time trips to avoid it is pretty fruitless.

I think many locals are more worried about the economy then the vog though as a local paper mentioned there was a 19% decrease in tourists for the month of September. I have noticed it is much less crowded this year compared to last and many business owners have told me things are very rough for them.

We bought our tickets last December and prices went from $1150 (what we paid) to nearly $2000 for the same tickets. Now they are around $1600. I probably will wait a couple more months to buy our tickets for next year.

At one time we thought we would be looking for alternative vacations to Hawaii. Now our thinking is we may cut back on tours, maybe eat more in our condos, and just go to one island on each trip. Of course the one island we would choose is Maui and that is the most expensive! I just don't think there really is an alternative to Hawaii.

gstepic said:
We have had several locals tell us the most scary part of the vog is there have been no long term studies so no one really knows the long term effects on the health of those exposed to it.
Click to expand...

Not exactly correct. Sulfur dioxide is the primary constituent of VOG, and we probably know more about the health effects of sulfur dioxide air pollution than we do any other type of air pollution. Many of the killer smog incidents of the past, such as the Donora Smog of 1948 are sulfur dioxide smogs.

I haven't seen specific characterizations of BI VOG. Because the classic killer sulfur dioxide smogs were caused by smoke from industrial furnaces and boilers combusting high sulfur coal, I suspect that the ash content of VOG is substantially lower than the ash content of killer sulfur dioxide smogs, and a lower ash content should mean reduced health impacts. But I'm not sure if that makes any difference or not. When we were on the BI in August the VOG on the south and west shores from Kilauea to Waikoloa was certainly sufficient to be a problem for people with respiratory problems, with the impacts less severe the greater the distance from Kilauea.

Below is a photo of the Waikoloa uplands taken from Mt. Kohala north of Waimea. In the photo you can see the collision between VOG-laden air coming around the south side of the island and "fresh" air coming across the island from Hamakua through Waimea. Look at the clouds and notice how the air from Hamakua (coming from the left side of the photo) eventually overruns the VOG air, trapping the VOG air near against the ground. Also note that there is little mixing of the two air masses.

When meteorologic conditions are suitable, that trapped VOG air mass can apparently travel long distances with little mixing, as indicated by the severity of VOG occurrences in West Maui and even O'ahu. 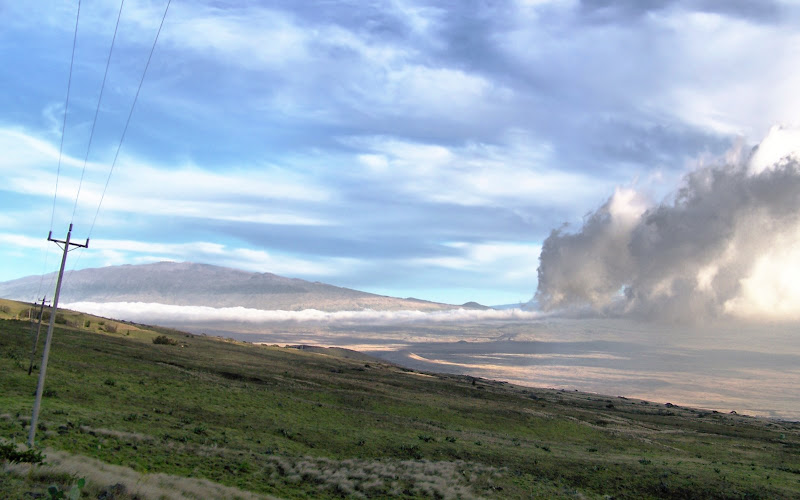 Is there a certain time of the year that it is worst? Or can it happen anytime?
I

riverdees05 said:
Is there a certain time of the year that it is worst? Or can it happen anytime?
Click to expand...

We're lucky to have nice trade winds on the islands. That's why it's so comfortable to live here every day. The prevailing trade winds come from the NE and usually blow the vog away from the other islands.

Occasionally, a passing weather system will interrupt the trades, and when that happens, we can get vog and it's also less comfortable here, even though the temps are pretty much the same because you can feel the humidity in the day time. It can happen any time of the year. When it does happen, it usually only lasts 1 - 3 days, though sometimes it's lasted longer.