The best places to eat at Disney, according to Wolfgang Puck

The best places to eat at Disney, according to Wolfgang Puck
Chef Puck's picks, from dim sum to Dole Whip

Orlando- “This is not Wolfgang Puck's first Disney rodeo.

The Austrian-born Puck, whose first venue, Spago, has been earning raves since opening its doors in L.A. in 1982, is arguably the world's first modern-era celebrity chef and the vehicle through which California pizza was popularized.

So, it's not surprising that pizzaiolos get star positioning at the new Wolfgang Puck Bar & Grill Orlando in Disney Springs. An expansive pizza bar gives them a stage (the stage door being the fiery maw of its wood-burning oven) and a comfortable row of seats where patrons enjoy a combination dinner/show/Q&A session.

It was part of the concept from the get-go, says Puck, who's created entertainment on a Disney-esque level without sacrificing quality. The crust on the smoked salmon pizza is solid proof. They make the same dish at his Las Vegas eatery, but had to alter its recipe for the Florida climate.

"In summertime, when it gets really humid, we use less liquid, we make it a little drier," he explains. "And so that way we keep the same time for fermentation."

Pizza, whether slathered in salmon, dill cream and chives or more traditional offerings, such as pepperoni or fennel sausage, make a great starter for families or groups, Puck notes, "and for me, if I go for a special thing, a bottle of champagne and a smoked salmon pizza is perfect!"

The restaurant's expansive and casually elegant farmhouse feel is quite natural for Puck.

"I grew up on a farm and farm-to-table was the only way we ate," he explains, "so I always loved this idea of a farmhouse. It's welcoming...and the new Disney Springs complex is very much a place where everyone – not just tourists at the parks, but local people – can go and hang out, shop a little bit, go for a drink or just have an ice cream”....” 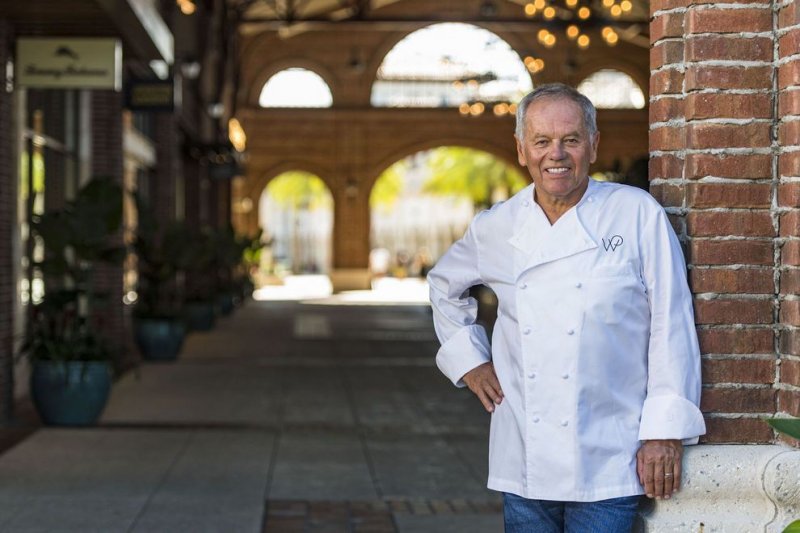 Disney food is so expensive. I think the hamburger place, kind of near where McDonald's used to be in Disney Springs, was $3.75 for a soft drink. A hamburger was $14. It was with refills and service for the soft drink, but that was crazy for our family. We choose water.
Mid October, Disney World or Covid will force us to cancel
Early December, Disney World
January 2021, Disney World again (why not?)
February-early March 2021, 5 weeks on Maui at Hono Koa and SOK
May 2021, Branson, Nashville and Hilton Head Island
R

(I hate all things Wolfgang Puck. I've tried both a restaurant experience and his pre-packaged offerings from my local supermarket. Both are inedible in my book. Bleck!)
A

The only experience we have with Wolfgang Puck - is the Wolfgang Puck Express by Earl of Sandwich. We like the variety/options and the prices are reasonable. We eat there at least once every trip. When he had the Cafe/Restaurant on the other side - we never ventured there. Not sure if we will venture to this new one. Time will tell/reviews, etc.

One of the best meals I've ever had was the one time we went to Epcot Center about 32 years ago. Had dinner at the Morrocan Pavilion and it was spectacular, even though there was lamb with the feast we ordered and I am not a lamb eater. Everything was outstanding!
A

clifffaith said:
One of the best meals I've ever had was the one time we went to Epcot Center about 32 years ago. Had dinner at the Morrocan Pavilion and it was spectacular, even though there was lamb with the feast we ordered and I am not a lamb eater. Everything was outstanding!
Click to expand...

Marrakesh? Not sure how popular it is. We have had dinner here twice in the last few years and hubby really likes it. Will definitely be returning.

The most delicious reasonable priced meal was at Saratoga’s food court, their lobster roll with chips and it is gluten free too. Last time I was there is was around $15. I subbed out and got their flourless chocolate cake, best I ever had.
You must log in or register to reply here.
Share:
Facebook Twitter Reddit Pinterest Tumblr WhatsApp Email Link
Top