My wife has always wanted to go there. I resisted because of the cost. We're older now and have the money so I thought I'd ask folks about there experience and see if this is something we would actually want to do.

We live on the east coast so it would be a very long trip. For those who have gone how did you book it? Did you use a brick and mortar travel agency or something on-line. What's the best time of year?What islands did you go to and where did you stay?

Most importantly, did you think it was worth it?

I haven't been to French Polynesia but here is some helpful information:

How to Travel to Bora Bora on a Budget: It's Possible!
By Lauren/ French Polynesia/ Travel Expenses/ NeverEndingFootSteps/ neverendingfootsteps.com

"When I was planning my South Pacific island-hopping adventure, I knew it wasn’t going to be cheap.

Unsurprisingly, the South Pacific is home to some of the priciest places on the planet; none more so than Bora Bora. This paradise island regularly tops lists of the most expensive honeymoon destinations in the world and during my research, I kept reading that prices range from “expensive” to “indescribably expensive”.

One of my favourite things to do when I travel is to shatter misconceptions about places around the world. I love going to destinations that have a reputation for being expensive and sharing exactly how you can visit for far cheaper.

Knowing that Bora Bora had such a high-end reputation was pulling me towards it. I immediately booked a one-way ticket to paradise, then set about figuring out how on earth I would be able to visit without spending all of my savings.

So can you visit Bora Bora on a budget?

One of my favourite views on Bora Bora: this is what you’ll see when you exit the airport on the island

Tahiti vs Bora Bora vs Moorea - Everything You Need to Know!
From WanderMustFamily/ wandermustfamily.com

"We have been lucky enough to visit not one but three of the French Polynesian islands! On our Round the World trip we wanted to visit as many of the islands of Polynesia as possible and we managed to visit Tahiti, Bora Bora and Moorea! If you are planning a once in a lifetime trip to Polynesia you may not have the opportunity or the inclination to visit all of these islands! But we are here to help you decide which island(s) is the right from for you by answer the question: Tahiti vs Bora Bora vs Moorea – which is better?

While it is hard to pick a winner in the battle of the island paradise titans of Tahiti vs Bora Bora vs Moorea it is, at least in my opinion, easier to pick a loser! For me Tahiti just doesn’t hold a candle to its more remote counter parts of Bora Bora and Moorea!....." 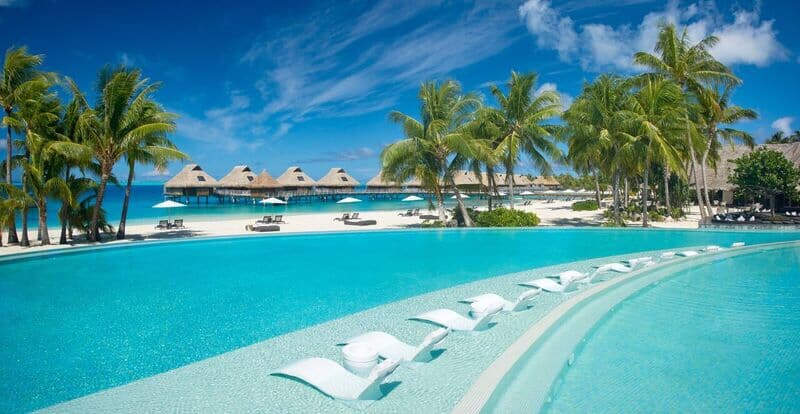 When I visited I took advantage and visited several islands in the main group, but also went to the Tuamotu group, farther north and east.

I landed in Tahiti, took a flight to Tikehau and stayed there 5 days. Flew to Raiatea, from there I took a Tradewinds Yacht for the week, in which we spent about 5 days around Bora Bora, then when we got back to Raiatea I flew to Bora Bora and stayed there for another few days in an overwater bungalow.

I stayed at the Pearl in both Tikehau and Bora Bora and at the Maneva Resort in Tahiti. If you do not have a lot of FF to burn on expensive hotel rooms, then the Pearl is a little bit less of price shock, but a perfectly fine resort.

Everything is expensive in FP. Just know that going it.

This was the view from my bed at the Pearl in Bora Bora.

We island-hopped the easy way via the Paul Gauguin cruise ship in May-June 2018.

The international airport is on the island of Tahiti, which is the most urbanized and I would say least interesting island.

From Tahiti we connected to a short and grossly overpriced inter-island flight to Bora Bora. It's hard to visit French Polynesia without going to Bora Bora, but be aware there's very little habitable land on the extinct volcanic center island so you're likely to spend your entire stay in Bora Bora on the motu (reef islet) that your resort hotel occupies. For Bora Bora we stayed in an over-water bungalow at Pearl Beach Resort, the same that Sandy pictures above.

Having flown Tahiti to Bora Bora we flew back Bora Bora to Moorea.

In Moorea we chose an inexpensive hotel, Les Tipaniers, where we stayed in an air conditioned cottage (only a few there have a/c) a minute or two walk to the beachfront. Moorea is an island in the normal sense. There are buses and taxis, but we found it easy to rent a car for the duration of our stay and drive literally around the island to its various attractions.

Boarding the ferry at the end of our stay on Moorea and crossing from Moorea to Tahiti harbor for the start of the cruise was simple.
Last edited: Mar 21, 2019
... the sun does not go round the earth,
... man's no centre of the universe;
And working in an office makes it worse.
Auden

We will be there with another TUG friend in late Sep on Tradewinds. As most of our cruise will be around Bora Bora, we plan to extend our trip by 4 days at the end to Moorea. We arrive on a Thursday and our cruise begins on Sat. Have not figured out where to spend our time at the beginning yet. Any suggestion is welcome.

We were just in FP in November. We took a direct flight from LAX to Tahiti island then took the ferry over to Moorea. We did three days on Moorea (Intercontinental) then ferried back to the Papeete airport then flew to Raiatea to board the Tradewinds boat. Did the same fabulous itinerary as Sandy, from Raiatea to Bora Bora then Taha'a island before arriving back on Raiatea. On our last day we flew back to Papeete and rented a car and drove around Tahiti before our return flight.

Tips to help with the sticker shock. 1. Set up a flight alert. There are sales - a good price from LAX would be in the $700 range but you'll have to be vigilant. Others on our boat took French Bee out of SFO - once couple only paid $350 round trip. (Color me jealous). The flight time is only 2 hours longer than Hawaii and worth every minute. 2. Don't be afraid to stay in a vacation rental. The next time we go we will definitely stay in one vs the hotel. The French Polynesian people that we met were warm and gracious. Driving around each island (even Tahiti) was easy. Staying and eating local would be the best bang for your buck if you want to save some money. 3. We have Verizon so we didn't have cell service (other than wifi) which meant a glorious vacation free of the internet, but others on our boat had T-Mobile and with their international plan had great internet. (However the internet free 10 days may have been the most relaxing part of our trip. Our family had an emergency contact number so it was 10 days of "no news is good news"). 4. On Tahiti island we spent our last day driving around to a famous surfing spot called Teahupoo (not much going on while we were there), then stopped at two great botanical gardens nearby. Both were free. The one near the site of the now closed Gaugin museum was the Harrison Smith Botanical Garden, and the other is called the Water Gardens Vaipahi. Well worth a stop. I had low expectations for Tahiti, but really enjoyed our unplanned day.

One thing is for sure - it is a wonderful place. Don't put off this trip. Make it a priority.
Last edited: Mar 21, 2019
Katherine

No matter where you go, there you are.

Hijacked thread too, but just to comment on airfare sales. I just booked a Fiji trip, and with my Chase portal discount, I got roundtrip air from LAX for $263. A steal. I think that sale is done and the prices are now more than double that, but Katherine's point is good, keep an eye out on sales. I moved my planned Fiji trip up a year because of the air sale. There are sales for FP too, so keep looking.
Last edited: Mar 22, 2019
Plans 2020: Gave up 2021: Wait and see.

Thanks for the replies (sorry to hijack OP’s thread a bit ). I just booked United out of SFO. Round trip direct flights $632 total. I’m pretty satisfied with the price.
BTW, we have T-Mobile so we are all set!
Last edited: Mar 22, 2019

I have been considering a trip to FP or Fiji for a couple of years now. But I have a dietary problem being on the island(s). Both my GF and I are highly allergic to fish or shellfish. So for anyone that has been there ... is there a good supply of beef/pork/chicken options in the restaurants that we can choose from. When I was in Fiji in the 70's, beef and pork dishes were almost non-existent.

PaulT said:
I have been considering a trip to FP or Fiji for a couple of years now. But I have a dietary problem being on the island(s). Both my GF and I are highly allergic to fish or shellfish. So for anyone that has been there ... is there a good supply of beef/pork/chicken options in the restaurants that we can choose from. When I was in Fiji in the 70's, beef and pork dishes were almost non-existent.
Click to expand...

I don't eat fish, at all, but it is a matter of personal choice rather than allergy. On the Tradewinds cruise this was easily accommodated. On the various islands it took a bit of effort to find non-fish items at the smaller places, but there was almost always a beef entree (although sometimes it was a hamburger). On Moorea we found a great pizza place - crazy I know - so once we found that life was easy peasy.
Katherine

No matter where you go, there you are.

LisaH said:
I just booked United out of SFO. Round trip direct flights $632 total. I’m pretty satisfied with the price.
Click to expand...

Sandy VDH said:
That is a new route for UA. i'm not surprised there are good fares.
Click to expand...