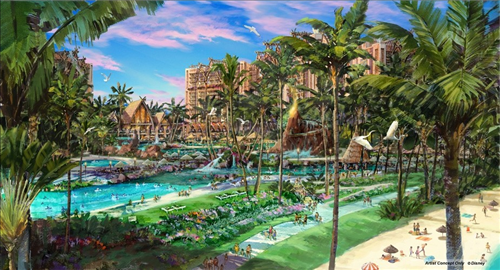 
KAPOLEI, Hawaii (AP) -- Seventy years after his first ride on Hawaii surf, Mickey Mouse is finally coming back to the islands.
Disney's plan for a Hawaii hotel complex unveiled Thursday is far from another Disneyland, both in distance and concept.

But Walt Disney Parks & Resorts' first venture in the islands will add 830 hotel and vacation time-share rooms, a fantasy-laden water play area and an 18,000 square-foot spa to the rapidly expanding Ko Olina resort on West Oahu.

A detailed scale model of the complex was displayed at a news conference with Disney officials and Honolulu Mayor Mufi Hannemann, who said the plans demonstrate how construction and business on the island continue to boom despite the global economic problems and drops in tourism.

It'll be the first such complex for Disney away from a theme park, combining a 350-room hotel with 480 vacation villas on one of Ko Olina's four man-made lagoons, which already feature a Marriott hotel and time shares, a luxury condominium project and wedding chapels.

"We plan to offer the opportunity for our guests to vacation in a completely new way, very different than they do at our theme park resorts, when they come here to Hawaii -- to be surrounded, to discover Oahu, to discover the Hawaiian Islands," said Disney resorts chairman Jay Rasulo.

The resort is expected to hire 1,000 "cast members," Rasulo said. Many will come from Oahu's relatively low-income Leeward Coast, where the city has been combatting the problem of homeless people living on the beaches.

Disney announced purchase of the 21-acre oceanfront site for $144 million a year ago, but Rasulo declined to say how much the resort would cost. He said the company wants to emphasize the storytelling tradition Disney brings to Hawaii and the cost of the project could change before completion expected in 2011.

He noted that one of Walt Disney's earliest films, "Hawaiian Holiday" of 1937, featured Mickey on a surfboard in the islands.

Disney also does film work in the islands, including production of ABC's "Lost" TV series.

Disney has several themed resort hotels near Disneyland in California and Disney World in Florida, but has never built a hotel and time-share complex that will stand on its own. Hawaii has no full-scale amusement park.

Rasulo had said there were no plans to expand the resort into a theme park.

The timeshare units will be part of the 350,000-member family-oriented Disney Vacation Club, which has eight other resorts.

Hannemann said the city and state are spending no money on the project and offered no special incentives to attract Disney to the islands. A $75 million unused tax credit allocated for construction of an aquarium at Ko Olina was pulled after the project was dropped.

Now that the initial excitement has worn off...

Gosh I am looking at that picture again. Does anyone think that those GIGANTIC high rises on either side of the pools make it look like a cage? UGH. Could they not go with 5-6 stories instead of 12????

Allows them to sell more "ocean view" properties! (Little joke for those who also read the Starwood board).
2020: SVV a lot (RunDisney!), WKORV, Europe on converted options if we can travel, …..

I can't believe the size of the place. It looks like a city.. UGG. How many are units are set aside for DVC?
"One day you’ll look to see I’ve gone,
For tomorrow may rain, so I’ll follow the sun"

icydog said:
I can't believe the size of the place. It looks like a city.. UGG. How many are units are set aside for DVC?
Click to expand...

Speculation is that the larger building (on the right) is the DVC portion. The new resort is proposed to have 350 hotel rooms and 480 villas.
N

Nice looking resort. Where exactly on the Vegas strip does Disney plan to put it?

nodge said:
Nice looking resort. Where exactly on the Vegas strip does Disney plan to put it?

Exactly. Not really my cup of tea for Hawaii. Ah well. The kids will probably care less.

nodge said:
Nice looking resort. Where exactly on the Vegas strip does Disney plan to put it?

Yes, I agree. It doesn't look like DVC does it? Is the cost of property much more expensive there than in Orlando? I'm guessing it is or why would they build so high. I think it looks awful. We are out of the buying mode for DVC, or anyplace else for that matter. I am trying to divest many of my timeshares now that the economy, and my life savings, has gone bust.
Last edited: Nov 7, 2008
"One day you’ll look to see I’ve gone,
For tomorrow may rain, so I’ll follow the sun"
D

And, yes, the price of the land there is very high. I heard once what they paid, but can't recall now. I did read though where early estimates of the price of the whole project was $800 million.
Last edited: Nov 7, 2008
You must log in or register to reply here.
Share:
Facebook Twitter Reddit Pinterest Tumblr WhatsApp Email Link
Top