A few weeks ago, I went to buy a turkey breast, but the breast cost the same as a whole turkey. No problem, I take that bird home a butcher it myself. One of those easier said than done things, but not the point of this post.

Good things happened right away- carcass parts cleaved away, to transform into turkey stock, then gravy and curried turkey soup. Two legs and two thighs we parceled and frozen.

Today I had a hankering for something in the crock pot so I thawed out those legs, pulled off the skin, and hacked off the tips to make em fit in my (fortunately oblong) crockpot. Braised those legs in balsamic vinegar with some tomatoes, it was awesome with some baby spinach thrown in at the end, served over polenta. 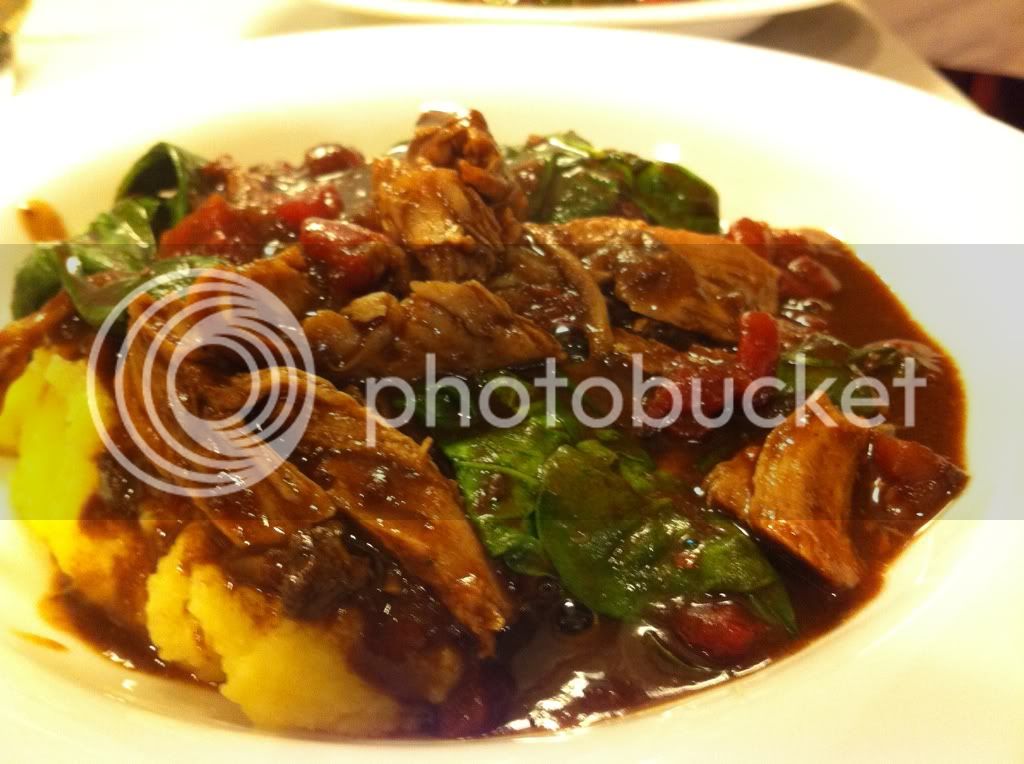 Recipe:
Two turkey legs, skin removed, trimmed to fit crockpot if necessary
Sauté in about 1 T oil one chopped onion. Cook until soft, then add 1 T tomato paste and 1/4 tsp anchovy paste, some thyme, fresh if you have it, and some red pepper flakes. Cook until mixture starts to brown, then stir in 3 T flour and cook 1 min. Stir in 1/2 cup balsamic vinegar and cook a bit until thick. Scrape into crockpot.

Add 1 15-oz can diced tomatoes, well drained, plus 1/4 cup red wine and 1/2 cup chicken broth. Nestle turkey legs in the sauce and cook on low 4-6 hours, until meat is tender.

In the meantime, trim stems from 5 ounces baby spinach. When meat cooked, remove from cooker as set aside to cool. When cool enough to handle, remove meat from the bone, shred coarsely, taking care to remove tendonous parts. Stir meat and spinach into the crockpot and cook just a few minutes until spinach is wilted.

Make yourself some instant polenta and throw in a nice knob of butter, maybe some freshly grated Parmesan.

Looks tasty! I'll have to give it a shot with the next chicken!

BTW, if you missed the Top Chef episode where Hung butchered chickens (same for turkeys) ...

http://www.youtube.com/watch?v=jnMiyBLhonE
No one can be exactly like me. Even I have trouble doing it. - T.Bankhead

Thanks for the recipe! I also bought a complete turkey just before Thanksgiving with the intention of smoking it after the holidays. Usually I just smoke the breast because there are just the two of us and a whole bird is just too much. A slowcooker recipe for the hinder parts is most welcome.

Stay tuned for the results.

Jim
In a world where we can be anything, BE KIND!

We sacrificed the carcass and a portion of leftover meat to a huge pot of turkey noodle soup.
Live on the edge -- take a laxative AND a sleeping pill.

Maybe considering the day, it might be possible to do something Indian with it. Tandouri Turkey? Turkey Tika Masala?

persia said:
Maybe considering the day, it might be possible to do something Indian with it. Tandouri Turkey? Turkey Tika Masala?
Click to expand...

What is the day today?!